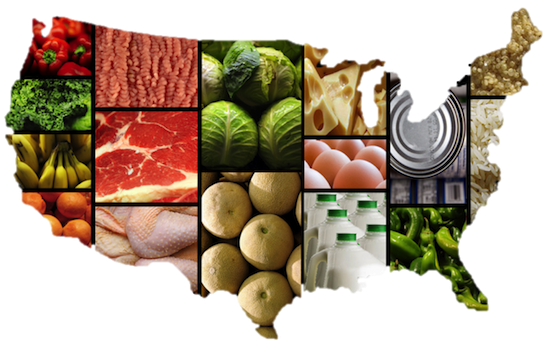 The food system is complex and multifaceted. It affects human health, the environment, and the economy and is closely linked to our culture and sense of community. Researchers, policymakers, and the stakeholders they serve need comprehensive food system indicators that can be readily accessed, updated, and compared across locations and over time. In this study, funded by the Healthy Foods, Healthy Lives Institute, a set of state-level food system indicators were developed and data on them were compiled for all 50 states for the period 1997 – 2012. While this work builds upon insights from previous food system indicator studies, it differs from past efforts in that data is collected at regular time intervals for multiple states at a consistent level of geopolitical resolution.

From an initial suite of more than 200 indicators, 63 unique indicators were selected using criteria such as continuity and consistency, accessibility, and geographic scope. Indicator identification and compilation occurred January 2010 – January 2011. PLEASE NOTE: Indicators were updated in 2016 using 2012 Census data. These indicators measure structural, economic, environmental, health, and social changes in the food system. Data for each of the 63 indicators were compiled primarily from government sources such as the US Census Bureau, the US Department of Agriculture (USDA), the Bureau of Economic Analysis, the Bureau of Labor Statistics and the Centers for Disease Control. The two largest sources of data employed in our study are the US Census Bureau’s Economic Census and the USDA’s Census of Agriculture.

Two indicator summary tools - national maps and state fact sheets - were developed to communicate indicator data and to highlight differences across states and changes over time. Approximately 680 maps, color-coded by performance measure, and 204 state and national fact sheets were generated for the project and are provided online, along with their data sources, to encourage hypothesis generation and testing as well as community goal setting and monitoring.

The State Level Food System Indicators report includes an introduction to the rationale and objectives for this project; a review of past indicator research; a detailed description of indicator identification and selection; a guide to using the food system indicator resources developed for this project; and a brief overview of future research needs. The report also includes appendices on potential indicators identified by the project team; indicator definitions, sources, and compilation methods; and summary findings from a principal components analysis of state-level food system indicators (prepared as an M.S. Thesis).

Use the links in the table below to view or download state and national fact sheets listing structural, economic, environmental, health, and social indicators for the years 1997, 2002, 2007, and 2012.

Use the link below to download an Excel file containing data for all the indicators compiled for this project. Please refer to Appendix B of the project report for indicator definitions, sources and compilation methods.

Several sample presentations are available demonstrating how national maps and state facts sheets can be used to stimulate food indicator discussion within research, public policy and civic communities. Use the first link below to download a sample PowerPoint Presentation that Illustrates how indicator summary resources can be incorporated into community and classroom presentations. The presentation can be customized to help identify important differences in state and regional food system structure, size, and performance over time and to identify significant trends in local food systems.

Use the second link below to download the Excel worksheet used to generate the supplemental graphs in the user's guide section of the project report and the sample presentation. There is a separate worksheet tab for each graph. Note that each graph uses a portion of the indicator data that has been extracted from the full data set, which is the first worksheet tab.

Finally, use the fourth link below to download a sample poster based on the 2007 Minnesota state fact sheet. The poster is in PowerPoint format.