The Annual Conference on Native American Nutrition is excited to announce "Celebrating Indigenous Women Chefs".  This first of its kind webinar series highlights the culinary expertise of Indigenous women through six LIVE cooking demonstrations. Join us each month as the featured guest chefs share their skills, knowledge, wisdom, and recipes. 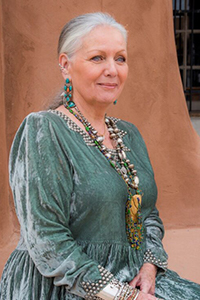 Chef Loretta Barrett Oden was raised in Oklahoma, a state she calls a “melting pot” as it is populated by 39 federally recognized Native American tribes from all parts of North America. She grew up surrounded by cooking and often accompanied her mother, grandmothers, and aunts while they prepared traditional dishes. As an adult, she realized the potential opportunity to educate others about Native American history and culture through cuisine. Loretta has spent the past thirty-plus years, cooking, studying, teaching and adapting recipes to preserve the culinary legacy of her upbringing. In the early 1990s, she and her son, the late chef Clayton Oden, opened the Corn Dance Cafe in Santa Fe, New Mexico, the first restaurant to showcase the bounty of food indigenous to the Americas. She is best known in the public eye for her five-part television series, “Seasoned With Spirit: A Native Cook’s Journey,” by PBS. Her work has opened minds (and mouths) to the diversity within Native American culture, a history that is often overlooked by the average population. Her work in educating others and sharing her love for history through food has earned her numerous awards and honors, including an Emmy for her PBS series. 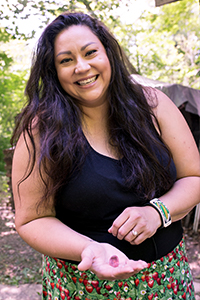 Chef Tawnya Brant is a Mohawk nation chef helping to revitalize the foods of the Haudenosaunee confederacy. She has been working in the food industry for over 26 years. After becoming a mother she switched her focus to the foods of her people and childhood. Tawnya works closely with her mother at Mohawk Seedkeepers Garden and having been brought up with traditional foods she has always brought passion to her dishes through culture. It took 20 years to marry those 2 concepts being a chef and our traditional foods but when she did it started Yawékon Foods in 2014. A catering company serving more traditional foods to the community. With its overwhelming popularity, she knew it had to grow! The result is Yawékon by Chef Tawnya Brant! A 1st of its kind daily Haudenosaunee food offering on her home territory of Six Nations of the Grand River in southern Ontario. Yawékon opened its door this past fall offering small-batch cooking and new menus daily. Yawékon is proud to offer menus and service in the Mohawk language. Tawnya is looking forward to expanding her company again in the very near future. You can find out more about Chef Tawnya's food journey through her YouTube Facebook and Instagram pages @cheftawnyabrant also follow the restaurant on Instagram @yawékon_ cheftawnyabrant.com 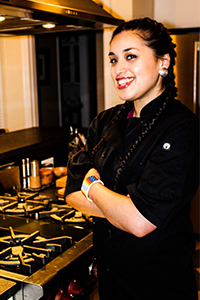 Hillel Echo-Hawk (Pawnee and Athabaskan) was born and raised in the interior of Alaska, around the Athabaskan village of Mentasta-home to the matriarchal chief and subsistence rights activist, Katie John. Watching John and other Indigenous Peoples fight for food sovereignty, as well as seeing her mother strive to make healthy, home-cooked meals for her and her six siblings has given Hillel a unique and important perspective on diet and wellness. Hillel has a passion for local, ethically sourced and sustainable foods, all through an Indigenous lens and perspective. Echo-Hawk is dedicated to the food sovereignty of Native peoples and is committed to empowering all Indigenous Peoples by increasing knowledge of an access to traditional diets and foods. Hillel believes that food should feed not only the body, but the spirit and midshipmen's of the community. After receiving her Bachelor's degree in Culinary Arts from Seattle Central College, Echo-Hawk has been working as a cook in some of Seattle's most innovative and popular restaurants for several years. She has also worked as a private chef, catering various events from the local Native non-profits and Native community events with pre-colonial, Indigenous meals. Hillel is a sister, aunt, daughter, and active member of her community. 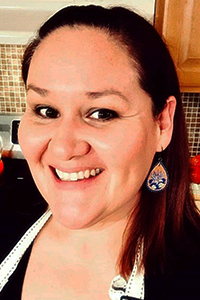 Elena Terry is the Executive Chef/Founder of Wild Bearies, a non-profit community outreach catering organization. She is also the Food and Culinary Program Coordinator for the Native American Food Sovereignty Alliance. One of her passions has been developing mentorship programs that help build stronger communities within the Indigenous Food Sovereignty movement, while empowering participants and establishing healthy relationships. As a seed to table chef, Elena advocates highly for indigenous and organic growers and producers. She utilizes her partnerships with the Intertribal Agriculture Council, University of Wisconsin, several tribal farms and her own farm to provide and preserve ancestral ingredients in her community.  In promoting the use of traditional ingredients and methods of cooking, she also partners with ethnobotanists to provide education about wild food and foraging in the communities she works with. Elena started as a traditional and ceremonial cook, is a wild game specialist and prefers open-fire, outdoor cooking; however, she is also a trained chef and loves to challenge herself in executing multi-course, plated meals. 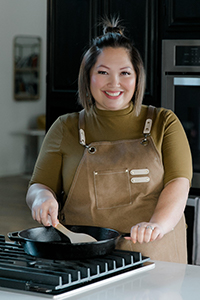 Kimberly Tilsen-Brave Heart; An enrolled citizen of the Oglala Lakota Nation of the Pine Ridge Indian Reservation in South Dakota, a small businesswoman entrepreneur; Executive Chef & Co-owner of Etiquette Catering Company. A unique artisan catering company located in the heart of Downtown Rapid City. Kimberly is a 6th generation entrepreneur proud to be a part of the Tanka Bar family. She is an entrepreneurship and economic development specialist, helping to assist in the launch of over 187 small businesses throughout the country.

Kimberly has been featured in Condé Nast Traveler, Departures Magazine, FODORS, and numerous other publications. Kimberly along with her husband Brandon Brave Heart launched an Etiquette Indigenous catering company in 2018 to award-winning acclaim. Utilizing their Indigenous food knowledge and leveraging food sovereignty to highlight the cuisine of our region.

Kimberly is an official TEDx Talk presenter, She was awarded the Enterprising Friend of Small Business Award for the SD CEO Women’s Business Center in 2019, She was awarded the prestigious National Award from the National Center 40 under 40 that recognizes 40 emerging Native American leaders who have demonstrated leadership, initiative, and dedication and made significant contributions in business. Kimberly along with her husband Brandon were awarded the Sustainability Award by the City of Rapid City for their commitment to creating a sustainably green business. She was selected as regional OTA Trailblazer fellow Highlighting the innovators of our region. She is as a prestigious participant of the Bush Foundation’s Native Nation Rebuilders Fellowship Program.  Kimberly was honored with the selection as the Native American Instructor of the SBA e200 Executive Management Training for the state of South Dakota. She is the co-founder of the South Dakota Indian Business Alliance, the award she holds closest to her heart is the Pine Ridge Area Chamber of Commerce Entrepreneur of the Year Award from her home reservation. 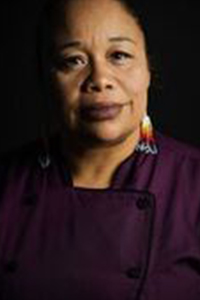 Crystal Wahpepah is an enrolled member of the Kickapoo Nation of Oklahoma. She was born and raised alongside a multi-tribal community in Oakland, CA where she learned Ancestral foodways as well as the formalities of running her own catering and food business. She is the first Native Chef to appear on food networks and chopped Crystal’s passion to create food by honoring the origins and land of each ingredient, as well as cultivating connection to Indigenous farmers and land stewards makes her a unique game-changer in the food industry. One of her clients says, “I take my time eating this because I know where it comes from.” Watch the horizon closely for Crystal and Wahpepah’s Kitchen, as she takes Ancestral foodways and brings them to the forefront with laughter, joy, playfulness, honor, respect, gratitude, reciprocity and collaboration. Crystal and Wahpepah’s Kitchen are the embodiment of how food can heal communities and society at large.